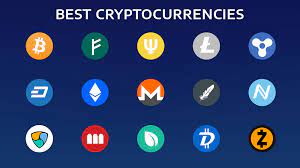 Are you looking for a few good options to invest in cryptocurrencies this year? If yes, then you certainly are required to go through this blog to know which option is best for you for making long-term investment. So, let’s go then:

Bitcoin was introduced as the first ever cryptocurrency in 2009 by an anonymous hero Santoshi Nakamoto. Just like most of the digital coins at different crypto platforms, Bitcoin also operates on blockchain technology where a distributed ledger is managed across the network of thousands of computers to bring out the transaction in a decentralized manner.

There is a mechanism of solving a cryptographic puzzle for the purpose of verification of additions made in the distributed ledger. And this mechanism is simply known as the proof of work which literally keeps the Bitcoin digital currency safe and secure from cyber frauds. As Bitcoin has already become a familiar word with most of the people, it’s prices are literally moving towards touching the sky.

Now if we take a quick look at Bitcoin’s price five years ago then you could have easily bought these at $500 and it reached upto $43,000 in September 2021 which is 8600% of its previous value. However, it has absolutely gone through various falls during this journey but currently its value is skyrocketing and created the new benchmark of crossing upto $62,000.

So, this can certainly be considered one of the best for long-term investing where it has current market capital worth is above $821 billions.

Ethereum is generally considered as the favorite digital currency by program developers whether it is in terms of blockchain technology or you are seeing it from the cryptocurrency ecosystem only because of its potential applications. With these applications, you certainly receive the opportunity to engage with smart contracts developed with the intention of its automatic execution when both parties agreed upon the same conditions and issuance of Non-Fungible tokens as well.

Now if we take a look at its overall growth from an investment point of view then here you are really going to witness its tremendous success that literally started from $11 and crossed the mark of $3,000 with an increasing rate of 27,000% in these five years.

Further the current worth of its market capitalization is more than $353 billions that can be absolutely considered as one of the best for the purpose of long-term investment.

Dogecoin has certainly emerged as a hot topic in the overall cryptocurrency marketplace recently only because of a great billionaire and a very famous celebrity named Elon Musk due to his tweet.

Earlier Dogecoin was merely created as a joke in 2013 only for the purpose of having fun. However, it rapidly entered the list of prominent cryptocurrency payment options with the influence of a dedicated community called creative memes.

As already know that other digital coins like Bitcoin or Ethereum as well can only be issued upto a certain limit in numbers. However, there is no certain limit created for the issuance of Dogecoins. And because of this, this digital currency is exposed to the risk of devaluation only when its supply will increase.

Now its current market capitalization is more than $26 billion and it is certainly a good option for you to consider it as one of the best long term investments.

Tether can be purchased in the form of Stablecoin unlike other cryptocurrencies. In simple words, this digital coin is supported by some of the current fiat currencies like Euro and US Dollar as well.

So, you can simply assume that this digital coin keeps a value equivalent to any of the above mentioned denominations. Thus, Tether seems here to be a more promising and more consistent digital coin as compared to any other crypto coin. And because of this reason, this is certainly preferred by those investors who are not willing to face the extreme volatility of other digital coins.

Further, this is absolutely a good investment option in the long run as it has current market capital of more than $68 billion.

So, here the bottom line is cryptocurrencies are no more only categorized as a speculative investment. Instead they can literally be seen as a better and potential source of investment in the long run. Further, these digital assets have really created their own worth among online retailers and institutional investors as well. So, they literally can be regarded as best for long-term investment however investors are absolutely required here to assess the potential of these given cryptocurrencies before making an investment into this.