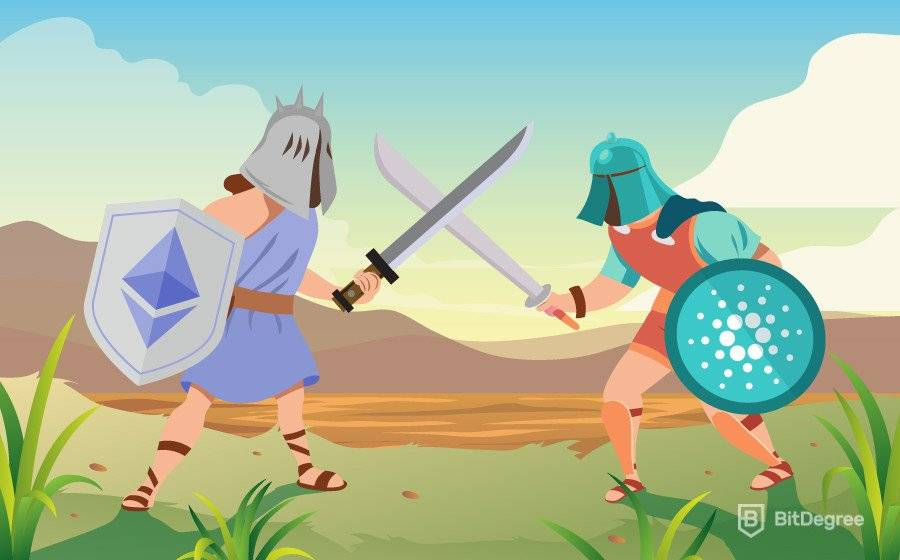 If you are among the crypto enthusiasts and wanna draw a fair and concrete comparison between the two high in demand coins  - Cardano vs Ethereum, follow the post till the end to have the panoramic view.

Both the coins are smart contract coins!

For those, who need a brief account of information on Smart Contract Coins, here is a quick explanation for them!

Wondering who’s gonna be the future king in the crypto world?

Let’s proceed and clear the air so you have a clear vision!

But before hopping on to the comparison between Cardano vs Ethereum, let’s first understand the origin of each coin and see where both the coins stand similar or different to each other.

To begin with, Let’s first start with the Ethereum

Ethereum is a decentralized blockchain, intended to facilitate the functionality of smart contracts and decentralised applications. Meaning, using the system of blockchain, intends to authenticate the contracts, eliminating the need for any third party. It came into existence in the year 2015. 19-year-old - Vitalik  Buterin, invented the open-source platform for the developers to launch their decentralized apps.

It also owns its cryptocurrency by the name of ‘Ether’, involving PoW (Proof of Work) to run its blockchain.

Ethereum is in the process of migrating to its next version which is Ethereum 2.0. The basic shift is of its consensus mechanism from PoW (Proof of Work) to PoS (Proof of Stake). In the said version, a person holding a minimum of 33 ETH could lock the funds to earn the rewards. ETH, too is minted and is distributed among the miners.

Unlike Bitcoin, the supply of ETH is not limited to a certain cap.

Cardona runs on the same line where using blockchain technology, it offers a decentralized platform to create smart contracts and building apps.

It was founded in the year 2017 by a co-founder of Ethereum - Charles Hoskinson and have its own cryptocurrency by the name of ADA coin. It is said that like Bitcoin, ADA too would have a limited supply of about 45 billion ADA’s out of which 31 billion are already in circulation.

Cardano was designed by a foundation named IOHK (Input Output Hong Kong) and further involved the contributions of two other organizations namely Cardano Foundation and Emurgo, for handling and promoting the overall affairs of Cardano.

A special feature about AKA coins is that they can also act like tokens in the event of voting matters within the blockchain.

So far performance is concerned, It is said that Cardano is slightly ahead of Ethereum and is slaying due to its light weight design and superior technology.

Cardano, featuring fee-free transaction plus and enabling people to create smart contracts with much ease at a faster pace has led to a greater popularity. Being a cheaper resort relatively and carrying out transactions in less time is what’s keeping it ahead of its competitors.

This is why it is even termed as ‘Ethereum Killer’.

Does that conclude that Cardano is a clear winner?

Cardano is a recent entry and the claims that the market promulgates about it is yet to materialize. Long story short, it would be too soon to comment about this new comer since it has yet to overcome the challenges that Ethereum has already surmounted,

Whereas, Ethereum is among the pioneer coins that made its place and faced all the challenges so far that market has to offer. Also it’s one of the biggest blockchain networks that has managed to survive the market adversities.

Also, when Ethereum 2.0 is on the way, it would be unfair to declare Cardano - the uncontested winner when we are yet to have the newer Ethereum with a changed structure.

So guys, What do you think about the competition between these close entries?

Feel free to share your views and also, head on to the latest news of cryptocurrencies on CrypTalks to stay abreast with the talks of the crypto world.

Register to our platform here